Alguer, an Italian city with a Catalan soul

Alghero is an ancient city with a fascinating past and a vibrant historical centre.
Its history is very much defined by its original role as a fortified city. It was initially under the dominion of the Genoa-based Doria family and then, from 1353 onwards, it found itself under Catalan-Aragonese sovereignty.
The destiny of Alghero was intertwined with the vicissitudes of the Iberian peninsula, and particularly with those of Catalonia.

Traces of the city's past lie in the numerous monuments and buildings drenched in history and sea salt that embellish the ancient town centre: towers and bastions, narrow alleys, time-honoured palaces, cupolas and bell towers alternate with traditional craft boutiques - all of which speak of battles, sieges, conquests, of a people and their customs. 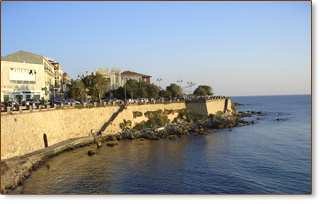 Visit the Alghero Turismo portal: you will find detailed information that will help you get to grips with Alghero and its history. 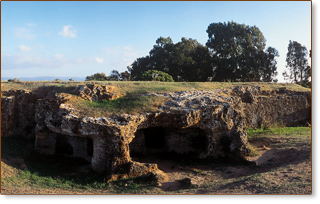 Just outside Alghero, along the road that leads to Porto Torres, you will come to one of the most significant complexes of hypogean tombs in Sardinia.

In the necropolis, which takes its name from
the owner of the smallholding, there are the remains of 38 underground tombs carved out
of the sandstone during the late-Neolithic era - around 3500 B.C.

The tombs, referred to in the Sardinian dialect
with the strange name of "Domus de Janas"
(fairy houses), were communal burial places featuring engravings depicting the god Taurus
and the goddess Mother.
These are indications of the religious culture
of the pre-nuragic period.

Guided tours are available and are managed
by the local SILT co-operative.

The nuraghi at Palmavera - a typical example of a nuragic village

The mysterious fascination exerted by the nuragic people and their enigmatic buildings can be experienced just a short distance from the coast. 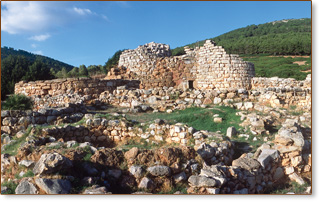 The nuragic village at Palmavera, sited just to the left of the road leading to Porto Conte, is very easy to find.

The village is constituted by a whole complex
of circular and rectangular huts, which were inhabited from the 15th to the 8th centuries B.C., until the village was abandoned following a devastating fire.

Palmavera is a perfect example of the organisational infrastructure of a nuragic settlement, with meeting huts, fences to control
the animals, wells and workshops.
Guided tours of the site are available.